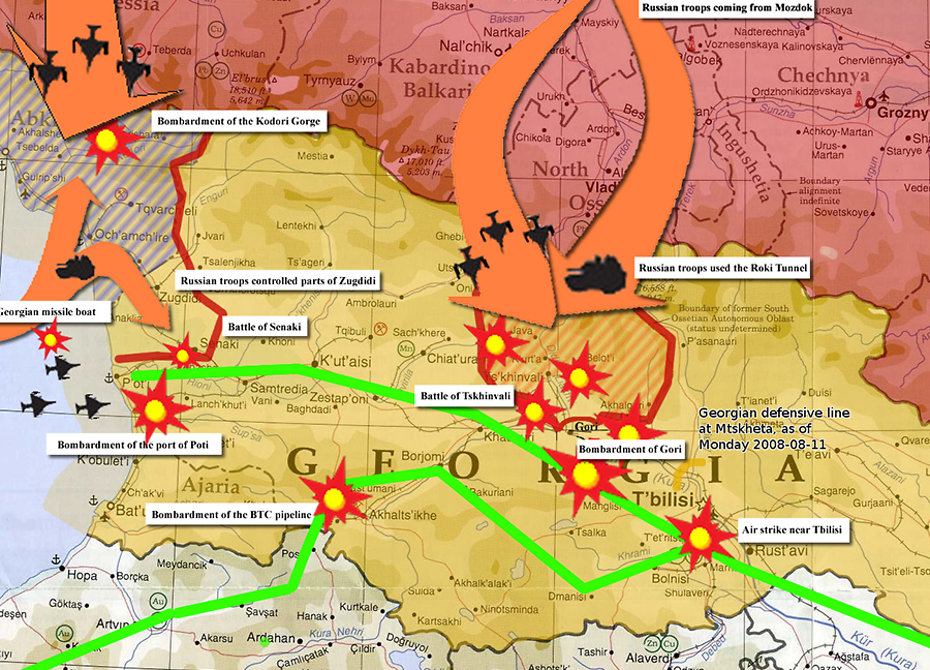 The war of 08.08.08 caused more than victims and breach in relations between Russia and Georgia. In hot August they conducted large-scale information warfare. Alexey Tokarev, Research Fellow of the Institute of International Research, MGIMO-University of the Russian MFA, explains who is to blame for the war between Georgia, South Ossetia and Russia.

Two most popular views of the conflict are the reverse of each other.

Mass consciousness in Russia pictures the insane Georgian president. While the whole of the Planet is watching the Olympics in China, Mikhail Saakashvili is dining on his tie. John McCane, a candidate for the US presidency, whose professional duty is hatred towards Russia, supports him. At first, Saakashvili calls a truce then pulls the “Grad” MLRSs to sleeping Tskhinval and bombs the town.

Russian peacekeepers get killed, president Medvedev is forced to bring the troops to prevent genocide against Ossetians. Eduard Kokoyti commands the forces repelling the Georgian invasion.

Federal media reports at least 5% of the Republic population killed, which means genocide. Russian Army triumphantly marches through South Ossetia, which is considered as yet Georgian sovereign while Vitali Churkin fights the World evil in the UN Security Council. Our tanks enter Gori. Tbilisi is a stone’s throw away from the motherland of the top Georgian. I wish we had not turned back and had stormed Tiflis, which had been Empire-dominated for years. It is high time to topple that US-led dummy married to Dutchwoman.

The West forms another point of view. Putin is trying to drive Saakashvili from office through Medvedev; he wants to get Georgia back into the Russia’s influence sphere and bring the Southern Caucasus under control, thus getting the better out of the USA. All that Putin is trying to pull through Georgian-Ossetian conflict where small Georgia guards against huge though technically backward army of the Northern aggressor. Russia is said to have started war preparations long before the August.

Russian soldiers are looting Georgia. Ossetian militants are even worse: robberies, rapes, shootings. It was just international community’s stand that could stop the barbarian violations of law.

Neither of approaches corresponded to the facts for the following reasons.

In the late 90ies, Georgia was a state that produced no social goods. It had a seat in the UN, a presidential limo, a coat of arms and a flag but had no true attributes of national identity. Corruption, “criminal lords”, decentralization of power (power centers in Sukhum, Tskhinval, Batumi and, for a short period, in Zugdidi) and “unofficial power centers” (in Gali region, Pankisi and Kodori Gorges as well as Javakheti) teared the country apart. Georgia used to be a state hosting four foreign military bases (Gudauta, Batumi, Akhalkalaki, Vaziani). Smuggling routes (including human trafficking) would pass through the country’s territory. From time to time Georgia used to reject officially guerrillas moving within its territory yet employing them for separatism suppression. An important social demand of the Rose Revolution was to recover the country’s integrity. It so happened Saakashvili won twice, in 2004 and 2008: over five opponents by 96% and over six opponents by 53% of votes. The share of military expenses was rising thus making in 2008 the huge 11% of GDP (none of the former Soviet Republics could afford more).

If official Tbilisi recognized Abkhazia as a republic within Georgia, South Ossetia just did not exist: it used to be the “Tskhinvali region” or the “territory of former autonomous South Ossetia area” in the official Georgian documents.

Throughout the post-Soviet period, Russia would issue passports to South Ossetia residents acknowledging them as Russian citizens. In July 2008 following the Georgian-US “Quick response” joint exercise, Russia conducted the exercise “Kavkaz-2008”. The “small foul” tactics when both sides are firing at each other’s settlements had been practiced for four years before the conflict.

Role of the West

Within the frame of “Foreign military financing” program the US provided Georgia with non-refundable loans for USD 30.6 million and with another 10 million to prepare to join NATO.

Within the framework of “Georgia Train and Equip Program”, US military trained Georgian mountain and infantry battalions and a tank company thus raising their level to that of the NATO country-members. “Georgia Sustainment and Stability Operations Program” of 2005-2007 was the next step on the US military way to strengthening Georgia’s defense capability. George Heine states that during Russia-Georgian war there were 130 military and civilian advisers in Georgia.

However, of all the White House Saakashvili received support just from the neocons i.e. the “hawks” who practice aggressive militarism and reason upon the right to impinge on other countries’ sovereignty. In December 2012 Evgeni Primakov recalled that “in April 2008 Condoleezza Rice had begged Saakashvili not to start war in Abkhazia”. The president of Georgia then made the last attempt of peaceful reintegration, proposing to Abkhazian authorities “unlimited autonomy” within the country, “overall federalism”, a post of vice-president, free-trade zones in Ochamchira and Gali districts, the right to veto any changes in the Constitution and other laws of Georgia concerning humanitarian issues. Sergei Shamba, head of the Abkhazian MFA, rejected the proposal.

It’s a silly thing to expect the White House’s desire to make war in the region where stretch the pipe lines of vital importance.

The Baku-Tbilisi-Ceyhan oil pipe line and Baku-Tbilisi-Erzurum gas pipeline despite loading difficulties remain important for the US administration due to unaccountability to Russia.

The 2008 war start is the domestic problem of Georgian political system as Georgia had failed to build the system of checks and balances that could have stopped the orders of Saakashvili to bomb the sleeping town even though he was confirmed of the unquestioning support of the West.

There is almost a five meter long “Uragan” MLRS ammo with open stabilizer at the entrance to the Gori military hall of fame. “This is the thing Russians bombed us with…” – they explain and add that remember Russian tanks in the streets of the town. Did Russia violate the international law by entering Gori? It did. What about the South Ossetia territory? It did not. That is how the Heidi Tagliavini-led commission describes in diplomatic terms the Russia’s participation.

“Combat actions started with massive operation of Georgia against Tskhinval and near-by territories on the night of 7 August. Massive artillery attack preceded the operation”. This is the first conclusion of the report recognizing Russia’s right to response for murdering the peacekeepers but conceiving the invasion of Georgian territory outside Ossetia disproportionate.

Official Tbilisi repeatedly declared after war that Russian equipment had passed through the Roki Tunnel as far back as 7 August though Western countries’ embassies (Eric Furnier recalls) received no information on Russia’s attack before 8 August. Yakobashvili, the minister of reintegration in the morning of 8 August called for Russia to interfere “as a true peacekeeper”. By that time, Georgian military had killed 10 Russian peacekeepers. The official aim of Tbilisi was “to restore constitutional order” in Ossetia. The version of Russia’s aggression and of adequate response appeared much later.

Eduard Kokoyti’s role in the conflict neither the Republic elite, nor the rest of Ossetians try to recall. They know it better than Russian mass-media where their president was when the war started. Despite declarations of the federal media, the Investigative Committee of Russia reports 162 South Ossetia civilians killed. This is the price paid for Georgian president’s venture who relied upon Western sponsors as well as public opinion in the country and knew quite well of the constant provocations on the part of Ossetians. Russian army could have reached Tbilisi thus breaking the international rules, annexing the South Ossetia and making the world range against it. Russia could have but did not. It was too far to 2014 in 2008.

Check for peacefulness. Why does Russia put forces on alert in the South? Ilya Kramnick
What to wait from the Syrian security officials’ visit to Moscow? Ilya Kramnick
Russia and the USA: missiles and the conflict model Aleksey Fenenko
More